The first time I ran into Cutea Benelli she was providing some customer support to a distraught panda bear in her Grim Bros. store.

All in a day’s work  for one of The Wastelands premier outfitters of Post-Apoc clothing, backpacks,

and the general necessities of survival in the land of mutant zombies with ‘tude.

(Although I do think that incident did colour her design choices when it came time to make a new Grim Bros. outfit.) 🙂 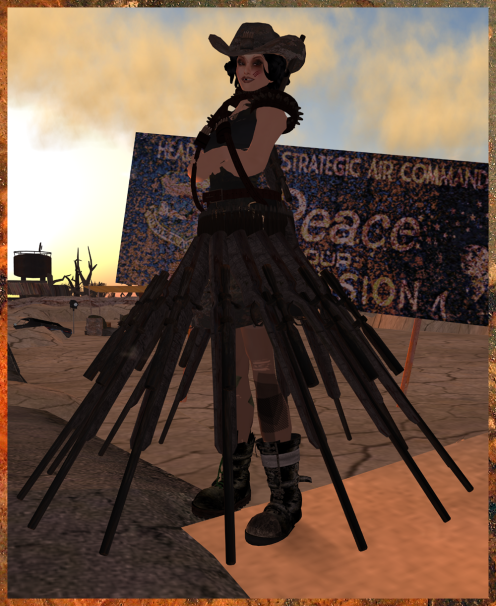 which translates as “There is NO such thing as Too Heavily Armed!”

When a gal has a killer sense of humour she needs a killer outfit!

If naked tooth and claw competition for survival in the burning wastes isn’t your thing though,

including Retro-Victoriana and CyberPunk (as blogged here at SP a few months ago. Cyber-Glam)

Details below the line in the sand

This entry was posted on November 12, 2010 by Grady Echegaray. It was filed under Accessories, Boots, Grady Echegaray, Post apocalyptic, SL People, SL Places and was tagged with avatar, cutea benelli, Second Life, the wastelands, Virtual Fashion.